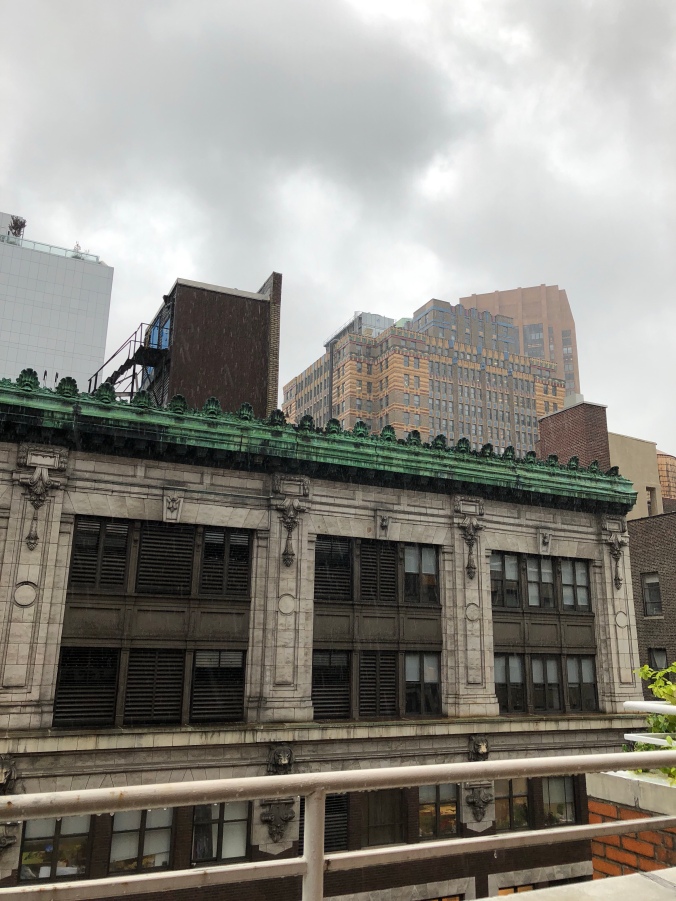 Traveling with family is soggy business.

It can refresh like spring shower. Urge forth blossoms and such.

The days drench you, and by nightfall, you’re ready to be wrung our because the weight of their water is so pervasive.

But it’s as real as the rain that keeps all of you in the room.

Because the stress of urban navigation and a morning of nostalgia and stairs wasn’t bonding enough.

Backwards, down into it,

With the teen who isn’t

And the grandmother who won’t.

In front but not in charge

SO GET OFF MY BACK!

I’ll figure it out.

Why won’t it stop raining?

To be a child alone at Christmas

Waiting on a step

The songs and the lights

One real and substantial

In its attempts to

Must be so frustrating,

Waiting on those steps.

To their twelve evenly

Alone in the back seat of cars

Looking at the decorated doors

Back the same again.

A different holiday waiting at each end.

Sitting on opposite steps

So when the last is opened

And no one is playing

And your steps are empty,

Because that when you get your Christmas,

You want to burn

To a melted mound

Dense enough to choke a reindeer. .

This happens every holiday

And a ragged breath

Until the next one.

Where I don’t have a leg to stand on

Because he’s a year older

And there is no Santa

And he’s ascending beyond

So, I sit on the steps

My carpet is old and thin.

Some yarn to tangle the time

Maybe someone to wait with.

So I’m not waiting.

be taken on one leg

before pushing off on the next.

My new novel Drowning Above Water is available in paperback and Kindle at Amazon.

These things can exist as the same time, in the same sphere. Time continuum intact. Streams not crossed.

Two people can both do good work. They can both be good people, striving for individual and collective greatness as they variously stumble and succeed on their way there. One does not negate or lessen the effect of the other. In fact, one might have no impact on the other at all.

I couch my petty insecurities in the cozy cushions of the real problems we face today. My only trouble this Monday was that because my son has two homes, there were two birthdays.

Specifically, there were two cakes.

Now, know this, ( because I need to hang my esteem on whatever tiny peg of righteousness I can find) we are all together for his birthday. There is one party. Friends and family. Home team. Always.

But, there was also a cake at one house, the day before. And there was a second on the actual day.

I was thrilled with mine. There was planning. There was searching and inspiration. There was online custom ordering where was not just Luigi, but “Luigi-from-Luigi’s-Mansion” Luigi.

It was rad, as the kids say. (Okay, they probably don’t say that. I say that.)

I also say, look at the bad ass cake I willed into existence.

(Serious note, much respect to Cassie’s Cake Toppers for the really fun and fantastic artistry. )

I did that. By did, I mean I peeled sugar art off of a piece of film and I laid it on a cake someone else made.

But I totally piped that green and white icing from the metal can on by myself.

And then I saw a picture of the cake he had at his dad’s house yesterday.

It was beautiful. It was absolutely stunning. It was as good as a flawless Ralph Lauren couture.   In every sense.

It was fondant and custom figure and 3D and it probably had its own WiFi.

Of that cake, I have no picture. Pictures are for closers.

The game, ladies and gentlemen and those fluidly named and unnamed, goes to team dad. And step-mom.

A third grader got two pretty fantastic birthday cakes. Because he has two people who love him. We had snacks together tonight. Kid. Mom. Dad. Just the three of us. To quietly enjoy the moment and remember it’s actually about more than cake. To do this, the ability to share that time together, is precious.  I recognize that this gives him a giant, resounding privilege that many children don’t have. I see that and I am grateful beyond words. I’m doing my best work to be sure he sees and knows and appreciates that, too.

On that front, he also got to see women marching in Pittsburgh this weekend, and I made him listen. Because I want him to see and know and appreciate no just what  goes into making a great cake, but what goes into making well a good mom and step-mom and dad and ally and decent human. All kinds of women and men. All kinds of cakes.

Yes. His mom “made” him a beautiful cake.

And yes, his dad and step-mom also made him a beautiful cake.

We should all want to make and do better.

This kid made us who we are and we struggle to be worthy. At home and beyond.

I forget. Every day. But I’ve been reminded lately, in both shouts and whispers, marches and tiptoes, that there are things that are worth that struggle.

I want to keep struggling.

And I also want some cake.

Poetery Collection – The Gone Side of Leaving

The Gone Side of Leaving

The Deli Counter of Justice

A bunch of us nerdy #lymphedema therapists talking treatment, compression, hating cancer, doing research and helping folks while we eat salad and look at disturbing pictures. Wear those garments, kids. And it would be awesome if Medicare and other insurances would cover such life-changing medical items. Thanks. #therapy #CDT #CLT #lymphedemawarrior #lymphedematreatment #lymphedemaawareness #lymphedivas

< Previous Next >
+ Add your own event Eventbrite